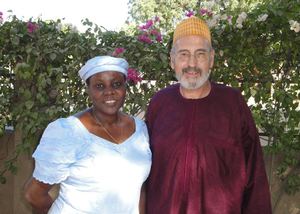 John and Abi Hunt, who are supported by LCBC, serve with SIM (Serving in Mission) in Jos, Nigeria.
John teaches at JETS (Jos ECWA Theological Seminary, ECWA being the denomination: Evangelical Church Winning All’) and is Acting SIM Nigeria Director. Abi teaches English at JETS, helps at Trauma Healing Workshops for victims of the violence in the North East and gives literacy classes to ladies at the ECWA hospital’s VVF clinic.

Recently John and Abi, along with the ECWA President and General Secretary, visited the North East of Nigeria to Adamawa State. Although Boko Haram are still active in some parts of the North East, there are signs that their activities are beginning to be contained and the new President is moving the Army Command Centre to the North East to focus on Boko Haram. 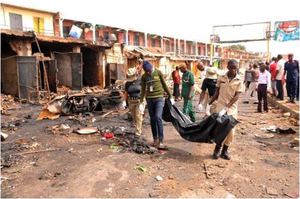 In the wake of the October attacks food, clothing, blankets, shelter, and medical care were sent. Between 60 and 70% of displaced people have now returned to Mubi; about 95% of people to Michika. The purpose of John and Abi’s trip in June was to identify with the people in their suffering, encourage them, and to assess the needs. John and Abi visited three destroyed churches and had time to greet those members who had returned. As they travelled they saw church after church that had been destroyed, the selective destruction of Christian houses, looted banks, and some destroyed military equipment.

The needs are many; it is difficult to know where to begin. But after much reflection and prayer, they have decided to assist 12 pastors so that they can return to their stations and take care of their members. Pastors are paid by their members, but in most of these places members themselves are struggling to survive. ECWA will provide a part of their salary. SIM Nigeria will provide food for them and their families for the next couple of months. Also SIM plan to assist with Trauma Healing Workshops and build temporary shelters for worship. This assistance is just a fraction of the need in Adamawa State, which is only one of the states affected.

John and Abi have requested prayer and finances to help with the ongoing needs. A gift day in support of this was held at LCBC last Sunday, but further gifts can be accepted by the church office until 26th July.