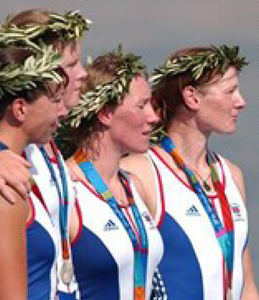 Over 60 women of all ages (some very sporty, some not!) met for a breakfast in September to hear Debbie Flood’s story. Debbie is a Great Britain double silver Olympic medallist in the Quadruple Sculls and 3 times gold medal winner in the Women’s Quad in the World Rowing Championships. We were very pleased to see Debbie and to be allowed to handle some of her medals and 2012 Olympic torch!

From her teenage years Debbie was determined to take part in top level competition, and was scouted as a possible national rower when in the gym. Debbie talked of how making a personal ‘life plan’ is a natural part of how we as humans make our way through life, be it in our choice of friends, career, development of skills etc – but that God works through those plans to show that he is our Creator God who holds us in his hands and will lovingly guide us in those pathways if we put our trust in him. Debbie’s favourite verse is ‘Trust in the Lord with all your heart, lean not on your own understanding, but in all ways acknowledge Him and he will direct your paths’. Proverbs 3:5-6. 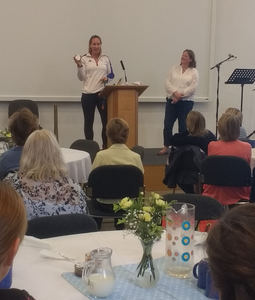 In the world of top level sport the drive to succeed is paramount, and failure in not achieving the very best can be a devastating blow that can leave the competitor feeling worthless. But Debbie found that her faith meant she placed her identity in Christ rather than in her abilities meaning it was easier to deal with the highs and lows that are an inevitable part of every athlete’s career. She wanted to do her very best as an athlete, not for herself but to glorify God in the use of her God-given talents.