Since LCBC had directed its annual Christmas London City Mission collection to the work of LCM’s Stuart Currie with the homeless of Tower Hamlets at Bow Baptist Church in East London, we thought we should head over there and check it out.  So Sue, Gill, Ollie and myself travelled to Bow on the afternoon of Thursday 14th April.

We found out that the church hosts the overnight GrowTH (Grow Tower Hamlets) homeless facilities each Thursday during March, April and May, and that they are in their second year doing this.  Different local churches provide facilities on the 6 other evenings of the week, and during the November-February months.  The whole project is part of a bigger GrowTH initiative, which aims to transition homeless people into work and accommodation.  GrowTH carefully vets all who come into the shelter, and each church is asked to accommodate a maximum of 15 ‘guests’ with a maximum of 3 females and therefore usually 12 males, with each guest being allowed 4 weeks in the shelter before they must move on – hopefully, with GrowTH’s help, to a better stage.

We arrived in time to help with setting up the canvas camp beds, making them up, and laying the tables for dinner.  A meal was being prepared by 3 other volunteers (non-Christians friends of Stuart and Meike), who produced a really tasty chickpea curry with rice, yoghurt and coriander. There were also plenty of cakes and bread, donated by a local German bakery.  Once everything was set up, the ‘guests’ started to arrive and check-in.  We began to mingle with them. Most were very approachable, and after handshakes we started to get to know them a little.  Others stood off a bit looking on a little nervously at us – who could blame them! 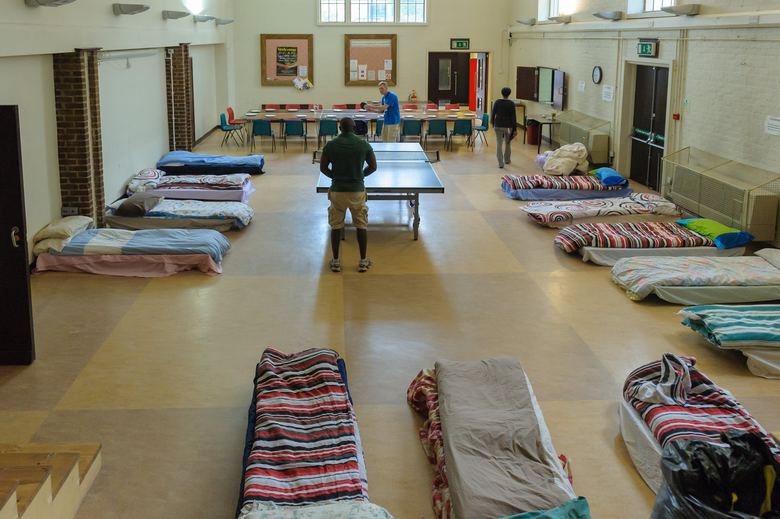 A few of them were in some kind of work, but none were yet earning anything like enough to provide for accommodation costs.  All are looking for permanent work, and several seemed well qualified – a chef, an engineer and construction workers.  The majority were from overseas but most could converse in English sufficiently for us to get alongside them.  All we spoke to had ‘a story.’  Once we got to know them a little, it was slightly disturbing to see that a couple of them were on the stand-by reserve list, and ultimately had to be turned away, but only after being given a meal.  It had been a nice day but was by now a chilly evening. Those on the reserve list know that this is the way things work, but are asked to turn up in case any of the 15 on the main list do not arrive.

We sat down to the meal together and conversation continued. Stuart had remarked that the guests seemed generally rather quiet on this particular evening, and pretty soon some started to collapse onto their beds and several were quickly asleep.  In some ways this was a shame, because Stuart would usually do a short gospel presentation for them.  Some stayed chatting at the tables, while we helped clear up. Other took a shower before going to bed. It was clear that Stuart was easily able to get alongside these guys, even though he had only 4 weeks to get to know them before they have to move on.  We also tried in our own ways to befriend them.

The time passed by quickly and we were soon heading home, reflecting on an enjoyable evening.  Yes, you might think this should be harder, but it had been a privilege to meet these people in the shelter, to begin to understand something of the challenges they face, and to try and walk alongside them, knowing that during their time in the shelter they will certainly have heard the gospel.